A Massacre of the Innocent in Pakistan In Malala Yousafzai’s acceptance lecture before the Nobel Committee, the 17 year-old remarked that she is “just a committed and stubborn person who wants to see every child getting quality education, who wants to see women having equal rights and who wants peace in every corner of the world.”

She is more than that. Malala is the first Pakistani to receive a Nobel Peace Prize, and also the youngest.  While living in her native Pakistan, she promoted education for young women, something forbidden under Taliban rule.  At the age of 11, she began writing a blog for the BBC on the suppression of education in Pakistan.  In 2012, members of the Taliban angered by her campaign shot her through the head as she rode the bus to school.  Malala survived.

After fleeing Pakistan, she began to campaign for children’s education around the world. Malala has given speeches before the United Nations and shaken hands with world leaders including President Obama.  Last week, Malala accepted the Nobel Peace Prize for her efforts on behalf of women’s rights and children’s education. She now attends a school in Great Britain.

Yesterday, militants from the Pakistani Taliban attacked a school in Peshawar province, leaving 141 dead.  Most of the victims were children.  The Taliban issued a statement taking responsibility for the attack, but emphasized that the militants attacked older pupils and not small children, as if this somehow mitigated their unconscionable actions.

With the solemnity of Christmas just days away, I am reminded of another massacre of the innocents.  Fearing that the birth of the Messiah was a threat to his power, Herod ordered the execution of all young children near Bethlehem.

The “Coventry Carol” is a beautiful, haunting hymn recounting the massacre of the innocents:

O sisters, too, how may we do,
For to preserve this day;
This poor Youngling for whom we sing,
Bye, bye, lully, lullay.

Herod the King, in his raging,
Charged he hath this day;
His men of might, in his own sight,
All children young, to slay.

Then woe is me, poor Child, for Thee,
And ever mourn and say;
For Thy parting, nor say nor sing,
Bye, bye, lully, lullay.

Malala Yousafzai, herself a victim of Taliban violence, condemned the “atrocious and cowardly” attack on the Pakistani school.  She declared that the campaign for children’s education in Pakistan cannot be defeated by terrorism.

I have so much admiration for Malala.  She is an example of heroism in the face of evil, of someone who could not be stopped no matter who tried to stop her.  She has a death sentence on her head if she ever returns to Pakistan, but this has not silenced her opposition.  She can look the Taliban in the face and board a school bus to receive an education.  She can hold conversations with world leaders and not bat an eye. 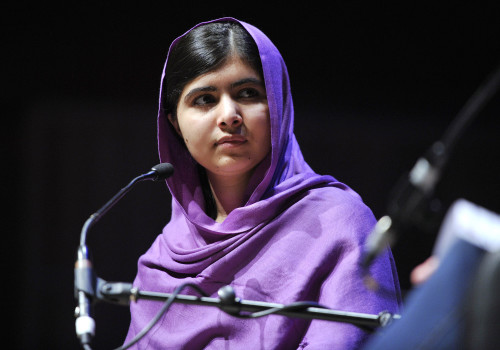 We can all learn from her example. We most likely will not be awarded a Nobel Peace Prize for our efforts, but at Christmastime, we will receive a far greater prize. Christ Himself comes to earth, and the bridge between heaven and earth is crossed by our Savior. He takes on human nature, not as a earthly king, as Herod had feared, but as an infant born in a stable. The Nativity of Our Lord shows us that evil, as demonstrated by the massacre of the innocent, will not have the final say. “So they went in haste and found Mary and Joseph, and the infant lying in the manger.”