This week, the ICPD, or International Conference on Population and Development, has sponsored a Global Youth Forum. Nine hundred delegates from every country in the world have flocked to Bali Indonesia to represent the world’s youth, which consists of 43% of the world’s population. The main topics of the forum were: Staying Healthy, Comprehensive Education, Transitions to Decent Employment, Families, youth-rights and well-being, and Fully Inclusive Civic Participation. The forum invited thousands of youth to act as “virtual delegates”. These delegates were told to participate in the Forum by watching “live video streams” of the Forum’s conferences, submitting recommendations on the five issues which were then selected to be published publicly on the Forum’s website.

As a virtual delegate I was extremely disappointed by the outcome of the Forum. Not only were the videos not streamed live as advertised, but a good amount of the talks were not in English and the Forum did not provide the virtual delegates with a form of translation. There were less than 2,500 delegates enrolled as virtual delegates as opposed to the 900 young people physically present in Bali. In contrast to the “43%” advertised as the percentage of youth around the world, this number only stands for 0.00008 % of the world’s youth. From Day 1, it was very difficult to follow the Forum. Due to the absence of live streaming, the forum’s happenings were ambious. This is in addition to the fact the the Forum was held in an acutely remote location of Bali. Throughout the four days of the forum, the forum’s purpose remained rather ambivalent. Speakers ranged from the Executive Director of the UNFPA,  Dr. Babatunde Osotimehin, to an Indonesian pop star to several “youth experts”.

Finally, on the last day of the Forum, the UNFPA and ICPD’s agenda were revealed. An “analytical specialist” was brought out the summarize the virtual delegates recommendation highlights. They placed into a document a list the highlights which they believed encapsulated the delegates recommendations. The whole list consisted of the need for de-stigmatized and free abortions, contraception and LGBT rights.

The day before, the International Youth Coalition recommended a statement that was endorsed by several other delegates. The recommendation declared:

“The IYc gathers 30,000 young people across the globe. We encourage the United Nations to protect the right to life of unborn children. Human life is not a disposable commodity, and every human being possesses inherent dignity and worth. We also encourage the United Nations to continue to protect and strengthen the natural family made of one man and one woman. Only this can guarantee future generations of youth opportunities for spiritual, social and economic development.”

No where in the UNPDA or ICPD’s Forum summary were any of these ideas included. After the summary was read, several people present were given the opportunity to make comments in front of the whole forum. After the document was read, one women at the conference commented that, “maybe abortion was not correct because of the fact that there are two persons involved in the matter, not just the mother”. Immediately following this comment, several others were made demanding that we need to stop asking the question wether the fetus is a child or not because this does not contribute to the well-being of the mother.

It is very curious to me that throughout this whole Forum, so many people were concerned about the well-being of people, promoted in civil participation, education and health, yet there was no mention of the most helpless human being on the planet: the unborn. If we are to be truly sympathetic to the human race, than we can not exclude those who many deem to simply be inconvenient. If the Global Youth Forum was to truly representative of all youth, than they would have not silenced the voices of those who are trying to speak on behalf of the voiceless. 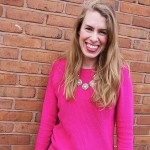